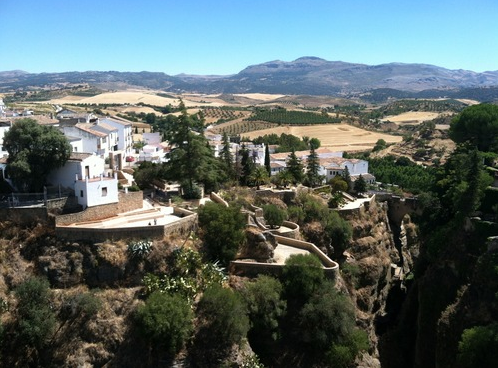 One of the reasons we had decided on Southern Spain as a destination was so that we could visit Ronda.  Everything we’d heard and read reiterated how beautiful and special a place it is.  Our host told us that yes, it was beautiful, but Arcos was his personal favorite due to fewer crowds and a more personal feel.  Given that information, we decided to hit Ronda first as it was a two-plus hour drive, and catch Arcos on the way back to Jerez.

While driving out to Ronda, we were again reminded of California.  The arid landscape around Jerez yielded to larger hills dotted with gnarled trees, then to tree covered mountains, then back to the hilly, arid landscape around Ronda.  The town of Ronda itself is formally called Ronda de la Frontera.  “De la Frontera” denotes that it was one of a string of towns that constituted the Moorish front line of defense nearly 1000 years ago.  Many of the old fortress walls remain, and some have been rebuilt (such as in Ronda).  We found Ronda to be gorgeous but very busy.  Once the tour busses arrive and start disgorging the hordes, the main drag through town becomes overrun.  It’s worth heading out to the city walls for views of the area and an escape from the busyness.  We hit up Bodega San Francisco just outside of the old town walls for lunch, and it didn’t disappoint.  Relaxing at a sprawling tapas bar with reasonable prices and plenty of outdoor seating is a great way to pass an hour and get your fill before heading back for more sight seeing.

One of the busier side streets hosting a fair that we didn’t have the energy to venture into:

Proof that we were there:

City walls, with Bodega San Francisco behind us:

Standing on the city walls:

One of the reasons Ronda was such a pain for invading armies:

Looking down the gorge:

We found Arcos to be true to our host’s statement.  It lacked crowds, and walking through the town felt like exploring a time warp.  The shops were friendlier and quieter than those of Ronda, and walking the beautifully peaceful streets was a relaxing way to wrap up the day.

The cliffs of Arcos which locals brag allow them to “see the backs of birds as they fly”:

Looking back into Arcos from the overlook:

We also stumbled upon a falconer who had at least a half dozen birds of prey ranging from falcons to owls.  We’re not sure exactly why he was there, other than to stand next to his array of birds, but he would occasionally pick one up and walk around with it.  Pretty cool, and it made for a good photo.