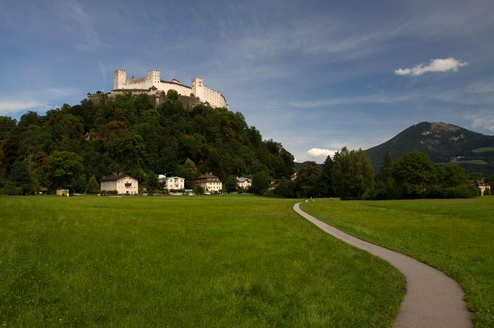 When I was 3, I watched The Sound of Music so many times every day that my parents told me they’d bring me to the filming locations in Salzburg if I’d please agree to only watch it once a day.  Done deal.  Though I now have vague memories of dancing around gazebos and being pushed through gardens in a stroller, a return to Salzburg at an age when I’d remember it seemed to only make sense.  Brian humored me, and we spent a pretty great two days exploring the city of the Von Trapps and Mozart.

There are many official Sound of Music tours you can do in Salzburg (buses plastered with pictures from the movie, people in full costume pouring out with cameras…not our scene), so we opted to tour ourselves around with an iPad loaded with maps instead.  We managed to navigate pretty well, and touring the different locations turned out to be a great way to see the whole city and some of the surrounding areas.

Beyond the SoM scenery, Salzburg was a beautiful little spot in which to spend some time after all the hiking and activity in Switzerland.  Though the food wasn’t our favorite (lots of bread, boiled sausages, pickled onions, and pungent cheese?), we did find a little mexican restaurant at the foot of the Monchsburg and enjoyed some applespritz drinks and surprisingly good burritos.  We appreciated the downtime too, especially since our airbnb was a cute little apartment where we had time to cook and play some serious scrabble games.  Oh, and I even convinced Brian to go to the Sound of Music show at the Salzburg Marionette Theater.  We weren’t sure what to expect, but it turns out an abbreviated version of SoM as performed by tiny marionette puppets is hysterical.  And impressive.  And yes, during the “Lonely Goatherd” song the Von Trapp children marionettes did indeed hold even tinier marionettes.  Awesome.

Some of the many Do-Re-Mi sites

The abbey where the real Maria lived

The cemetery scenes were shot on a soundstage in California, but they were inspired by this rather beautiful cemetery behind St. Peter’s

Monchsburg and the Abbey up on the hill

One of the many “Von Trapp family homes”

A little skeptical of the potent cheese…

…and the boiled sausages…

…and the overly fermented beer that exploded upon opening