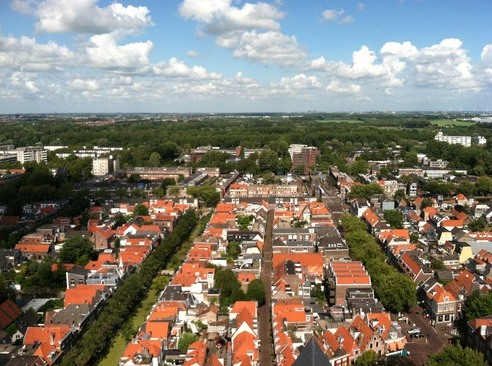 We’d wanted to make the trip to Scheveningen Beach since Jill and Matt told us about it, and we had planned to bike there.  However, the realization that it would be an 80 km bike ride combined with the on-again-off-again thunderstorms in the area convinced us to take the train instead.  By doing so, we were also able to see Delft on the way back.

Scheveningen Beach is just outside of The Hague, and when we climbed over the dunes we were struck with a funny feeling…the arcade games… the boardwalk… the music coming from the beachside restaurants and bars… the smell of fried sugar… we’d been here before…IT’S THE DUTCH JERSEY SHORE!   Laurel was pretty excited by this fact, so we headed down to the beach to see the action.  The boardwalk is paralleled by restaurants (some with awesome beach couch seating) and children’s games, and beyond that is a wide expanse of beach.   It’s also apparently one of the biggest kite boarding beaches around.  Neither of us had ever seen such a concentration of kite boarders, and what was almost as impressive as their speed was that no one was wrapping their lines around anyone else’s.

The only downside to our visit to Scheveningen Beach was that the heat wave was over in The Netherlands, and temperatures were back to their usual low seventies.  The temperatures and high winds ensured we stayed out of the water.  After walking a good stretch of beach, and Laurel getting her fill of ocean for the day, we headed on to Delft.

Matt had been adamant that we visit Delft, and we could quickly see why.  It’s the home of Delft Blue China, which it turns out isn’t actually china but a kind of highly heated glazed pottery.  The town is adorable – as quaint as any we’d visited and covered in the aforementioned blue china.  There were even benches, telephone poles, and information booths sporting the familiar blue and white designs.  It seemed that a shop on every corner sold used, new, and antique Delft Blue.

Beyond the pottery, there were some incredible churches there to include one leaning out over a canal and threatening to topple at any moment.  The church in the central square houses the remains of the Dutch Royal Family, and for 3.5 Euros you can visit the tombs.  You can also pay 3.5 Euros to climb the stairs to the top of the ridiculously high steeple, which is what we chose to do.  Brian was told that the staircase was too narrow for him to bring his pack,  which should have been a clue as to what lay ahead.

Inside the tower was a stone spiral staircase barely shoulder width, and when passing someone going the other direction we had to turn and cling to the center pole while he or she squeezed by.  We assumed this was typical protocol until we realized we were the only ones turning, and everyone else was simply pushing on through. The rest of the climb felt like a weird game of rude chicken, but we eventually reached the top, and the view was worth the hassle.  The town square spread out before us, and in every direction rows of orange rooftops and canals reached out from the city center. It was amazing to see the whole city and to be so close to the steeple that had seemed so high from our vantage point down in the square.  We snapped plenty of pictures, and then braced ourselves for the crowded walk down the stairs.  After being told by one woman to get out of her way, and overhearing another man’s “Americans-can’t-take-these-stairs-because-they’re-too-fat-hahahaha” comment, we made it to the bottom and bolted from the church.   For the most part we’d only met kind and helpful people on our travels, so the pushiness here took us by surprise.  By the time we reached the bottom we were a little worn thin on patience and skipped the tombs, instead stopping by a cheese store for some samples before heading back to Rotterdam.

Photos of the Adventures!
The boardwalk at Sheveningen

Sculpture on the boardwalk

The pier at Scheveningen that seemed oddly abandoned

The steeple that was almost halfway over the canal

The ring above the clock?  That’s where we ascended to.

Our first peek out from the steeple

Foolishly, we thought we were pretty high up

Then we were looking down on the steeple of another church…

Then the whole city was within our sights

Looking down on the main square from the top

The aforementioned staircase, with feet included for reference